In my first agronomy update regarding fungicides for corn in 2015, we found that when some foliar diseases are present, foliar fungicides tend to increase yields more than when there are no diseases present. In addition to this not so surprising finding, we also discovered that environments most at-risk for foliar disease development tended to be those with more corn in the rotation and with less tillage.

Since then, I have walked many corn fields in eastern Iowa and will share my general observations.

Prime conditions for NCLB development in 2015

In the approximately two weeks since my last agronomy update, I have spent a good amount of time in Eastern Iowa corn fields. During this period, I have been watching for foliar diseases to develop. Given I have almost exclusively been in fields either in their second year of corn or where corn followed soybeans and where conventional tillage—significant fall and some spring tillage—was used, my direct observations will only apply to environments where there is limited corn residue on the soil’s surface. In these environments, we would typically expect the risk of NCLB development to be moderate or low.

However, the combination of the weather—rain that has distributed inoculum into the canopy and wet conditions that favor disease development on leaf surfaces—and the NCLB outbreak in 2014 have made even these environments more prone to disease development than we would typically expect, particularly if susceptible hybrids are grown.

In my recent journeys, I have been keeping track of the amount of NCLB I have observed on the ear leaf and the two leaves below it. In total, I have looked at about 40 different hybrids in about 7 different environments with over half of these observations from the West Liberty, IA Liqui-Grow demonstration plots.

Within these 40 hybrids, the NCLB resistance rating has ranged from 4-to-8 (on a 1-10 scale, with 1 being poor and 10 being excellent) with an average NCLB resistance rating of 6.4. On these 40 hybrids, the NCLB severity has ranged from every plant having some NCLB throughout the lower and middle canopy—about 5% of the canopy or so—to hybrids with no NCLB lesions present.

NCLB will develop on hybrids with low resistance ratings

What do these NCLB resistance ratings tell us? They tell us that hybrids with below average NCLB resistance are likely to develop severe NCLB given the good weather for disease development, even in environments where there isn’t an abundance of corn residue on the soil’s surface.

This data also says hybrids with above average-to-good resistance ratings are less likely to develop NCLB at economic levels necessary for control in environments where there is little corn residue (and NCLB inoculum) on the soil’s surface.

In environments with lots of corn residue on the soil’s surface, however, even hybrids with good resistance can be overcome.

Because average temperatures are expected to be in the mid 70’s, and relative humidity will be higher than normal for about the next 10 days, we would expect conditions to remain favorable for NCLB development.

While walking corn with pollen falling isn’t the most enjoyable gig (trust me), a quick inspection of your hybrids—particularly those that have less genetic resistance—could well pay big dividends in 2015. On your scouting adventure, consider spraying if foliar disease has reached two leaves below the developing ear (or higher in the canopy) on about half the plants.

It’s not too late. Corn can respond to foliar fungicides through R3 or “milk” stage (about 18-to-20 days after R1 or silking), particularly if it’s needed. 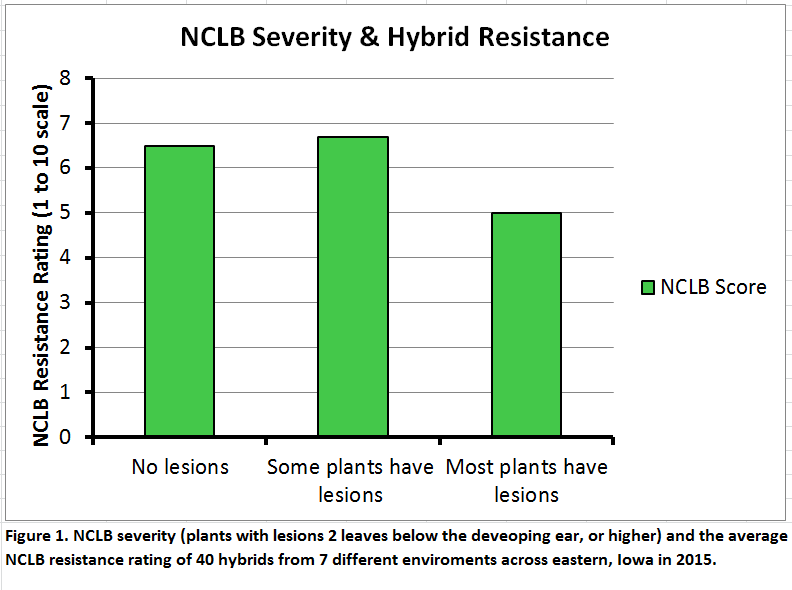